Just before the new year I headed up to Parlick to get some much needed fresh air, and maybe a bit of airtime. Walking up with Simon, he noted the wind turbines were showing an easterly direction, but we were feeling a light westerly on the hill. We arrived on the west face and Simon also noted that the clouds were moving quickly and that a cold front was approaching from the north; as could be seen from a thick band of cloud heading our way. The wind was light on the hill and Simon flew over to Fairsnape. I followed behind but had to land as it was too light. After a couple of minutes the wind picked up a little. Simon had wisely landed, after seeing increasing cloud speeds. I launched, then pushed out when I could feel the wind getting stronger, and this is when the conditions changed suddenly. I was hit by a series of gusts from all directions and wind speeds I’ve never experienced before. I looked up to see the wing tucking, pitching and rotating violently. This lasted a minute or so until at a lower altitude. As soon as I regained flight I put big big ears in and full speed bar to get as far away from the hill as possible before landing.

Analysis of the day.

What I did wrong..

After getting up in the morning, a brief look at xc weather showed light winds, but strong gusts. My thoughts where I will land if it gets strong, how bad can it get, it’s winter. That was my first mistake.

The next was that the low clouds were moving at a fair pace, but still very light on the hill, all warnings of wind shear that wasn’t registering in my head. Looking at the soundings for the area, it showed that at around midday the upper winds would veer and strengthen over a short time period. This was all forecasted surprisingly accurately, but I hadn’t bothered to check the forecasts. After some following research, I was reminded that approaching cold fronts do cause sudden change in wind direction and strength, creating severe turbulence and wind shear.

What I did right..

Hands up, allow the wing to recover, brake the dive, try to stay calm.

I thought afterwards whether I should have thrown my reserve, if low throw. Being level and close to the hill, any deployment could have been risky, hitting hard against the slope, followed by a dragging. I can only speculate on whether it was the right decision as not throwing was also risky. 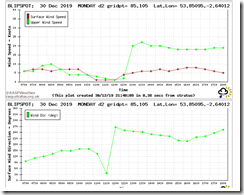